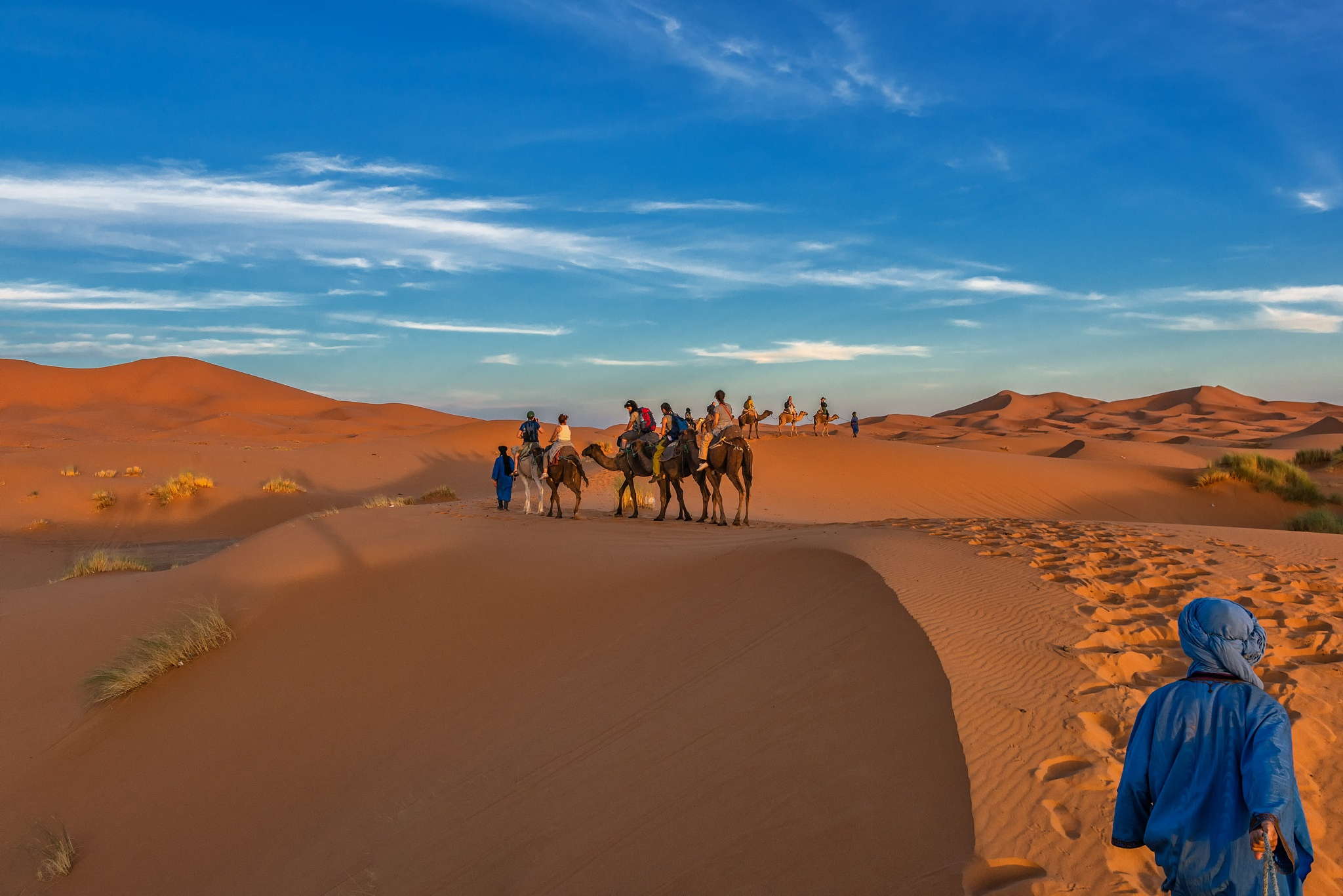 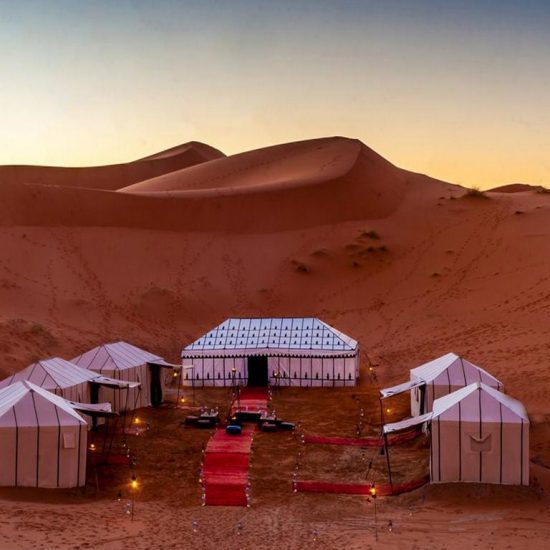 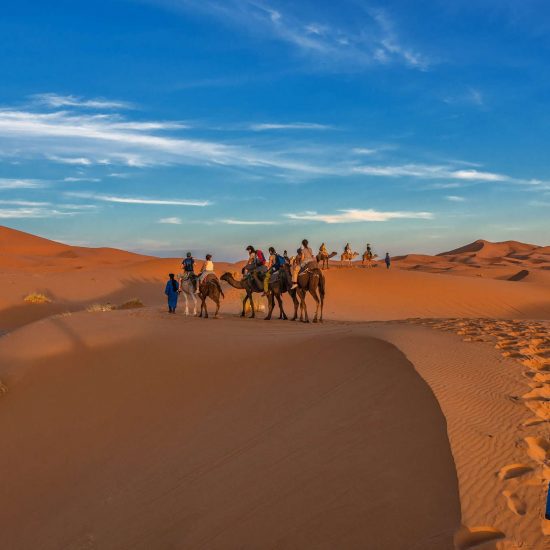 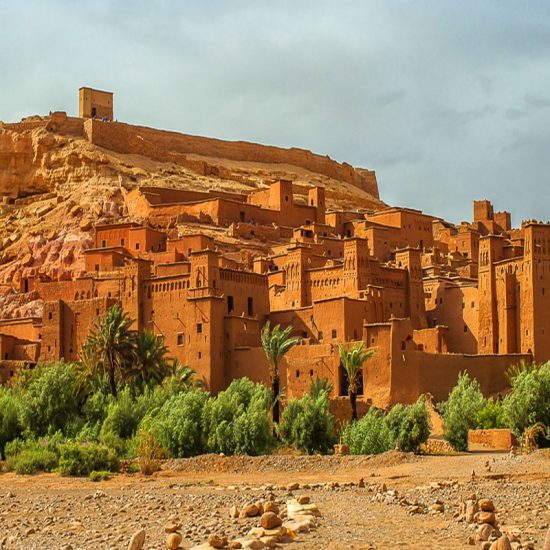 Arrival at the Mohamed V airport in Casablanca, welcome, guidance, and transfer to the hotel/riad for the night.
2

After breakfast, you will visit Casablanca's Hassan II Mosque, the world's third-largest mosque. After that, you'll drive to Rabat, where you'll see the city's most important sights, including the Hassan Tower, Mohammed V Mausoleum, and the Oudayas Kasbah, which overlooks the Atlantic. Then go to Meknes, one of Morocco's historic royal capitals, for a coffee break and a stroll around its bustling plaza and Medina (Lahdim). In Meknes, stay in a riad for the night.
3

This morning will be spent exploring this wonderful Imperial city. Mosolum Moulay Ismail, Bab Mansour, and Sahrij Soani are among the sights to see in Meknes. After lunch, you'll go to Volubilis, Morocco's greatest example of an old Roman city. After that, go to Moulay Idriss Zerhoun, Morocco's holiest Islamic town, where thousands of Moroccan devout flock to pray at the grave of this descendent of the Prophet Mohammed every August. After that, you'll go to Fez, where you'll have supper at your hotel.
4

The entire day is dedicated to learning about this UNESCO World Heritage Site. The medieval Medina of Fes, with its Attarine and Bou Anania Medersas, the Nejjarine fountain, the Moulay Idriss tomb, and the Karaouine mosque, are all worth visiting. Afternoon journey to Midelt, the apple capital, at the foot of the Ayachi Mountain, through Azrou, where you may view Barbary apes in the Middle Atlas forest, and then to your accommodation in Midelt, the apple city.
5

At 9 a.m., depart from Medilt towards the Merzouga desert. We'll go via the Ziz Valley and across the Tizi-n-Talremt pass, which is famed for its palm palms and the length of the oasis. Numerous ksars, or tiny villages of individual dwellings, can be found all along the route. We travel from here to Er Rachidia and then to Erfoud, which is known for its date festival and fossils. Then head to Merzouga, where you'll meet your camel guide for a journey into the dunes to your bivouac (camp). The nomad tent will be used for dinner and sleep. We will spend the night in an equipped camp in the middle of the Sahara, which is an excellent opportunity to take beautiful pictures of the sunset and sunrise. When you arrive at the camp, you will walk to the high dunes to see the sunset. When the sky is clear and the stars sparkle and shine brightly, it will be a magical night. You will spend the night camping in the desert after a delicious meal over a campfire.
6

After seeing the sunrise, ride the camels back to Merzouga hotel for a wash and breakfast. Today we will depart the desert for Rissani, where you may explore the souk (the area's largest market), and then proceed to Tinghir and Todra gorges, Morocco's tallest and narrowest gorges. We'll drive to the Dades Valley after lunch in the valley, where you'll witness beautiful sand castles and fascinating rock formations known as "monkey fingers." The night will be spent in a beautiful hotel with a view of the Dades valley.
7

After breakfast, travel for Ouarzazate via the Dades Valley, a stretch of kasbahs that has earned this famous route the moniker "Valley of a Thousand Kasbahs." Visit Kalaa Mgouna, the rose city, just before the town of Skoura, where you may buy native rosewater. We'll keep going till we reach Ouarzazate. "Africa's Hollywood," as it's known. Onwards, past the magnificent "sandcastles" of the "Road of a Thousand Kasbahs." We'll stop at the renowned Kasbah Ait Benhaddou after 30 kilometers from Ouarzazate. The kasbah is a UNESCO world heritage site and one of the most interesting red earth castles line the ancient route of the Kasbahs. We'll have lunch near the Kasbah before continuing on to Marrakesh over the famed Tizi-in-Tichka pass in the High Atlas Mountains. The range's peaks are covered with snow for the most of the year. On the twisting roads through Berber settlements, take in the grandeur of the ageless scenery. When you arrive in Marrakesh, you will be housed at a hotel/riad for the night.
8

Marrakech, often known as the "Pearl of the South," is the second-oldest imperial city in Morocco. After breakfast, begin a tour of historical Marrakech, including the Menara Garden, the Saadian Tombs, the Bahia Palace, the Koutoubia Minaret, and the Majorelle Gardens, named after the famous French painter, who built his art deco villa here and established the botanical gardens; in 1980, it became Yves Saint Laurent's residence. Visit the renowned Djemaa El Fna plaza in the afternoon, as well as the adjacent souks and artisan districts. Check into your Riad in the evening.
9

The Ouzoud Waterfalls, 160 kilometers from Marrakech, are visited early in the morning. They stand more than 60 meters tall and are one among the Moroccan Atlas' most impressive natural features. A trail leads from the olive trees at the foot of the falls to the top of the falls, where we may take in the spectacular views. Lunch will be provided, as well as free time to visit this lovely location before returning to Marrakech for the night.
10

Transfer to Casablanca Mohammed V International Airport for your return journey after breakfast. 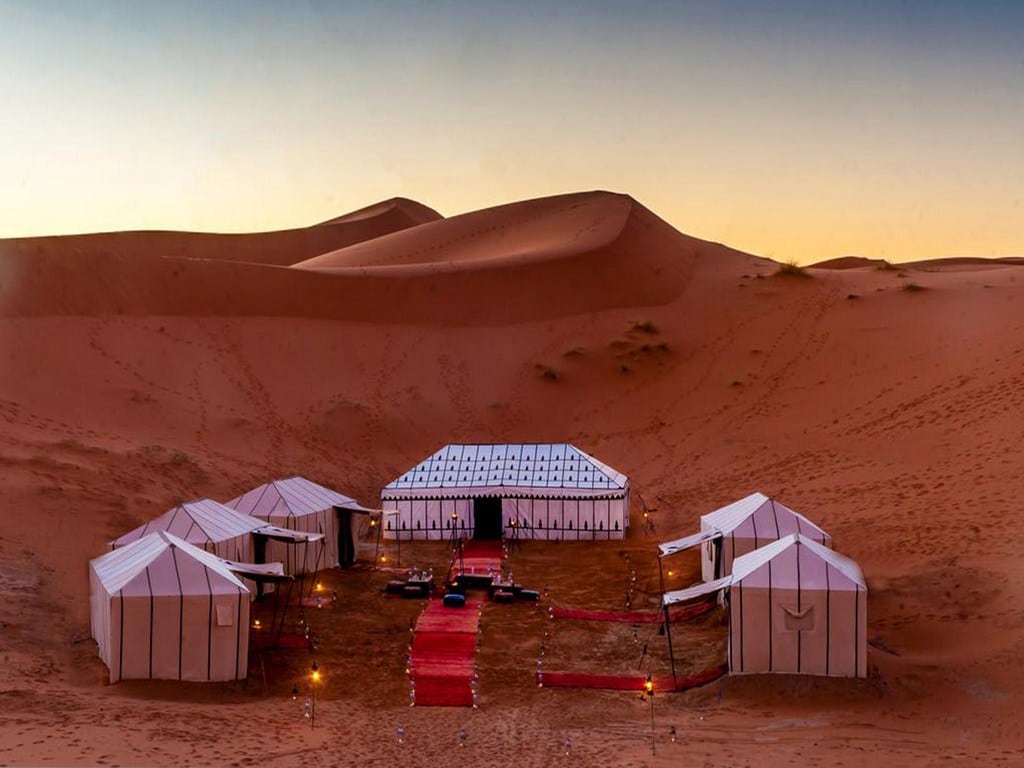 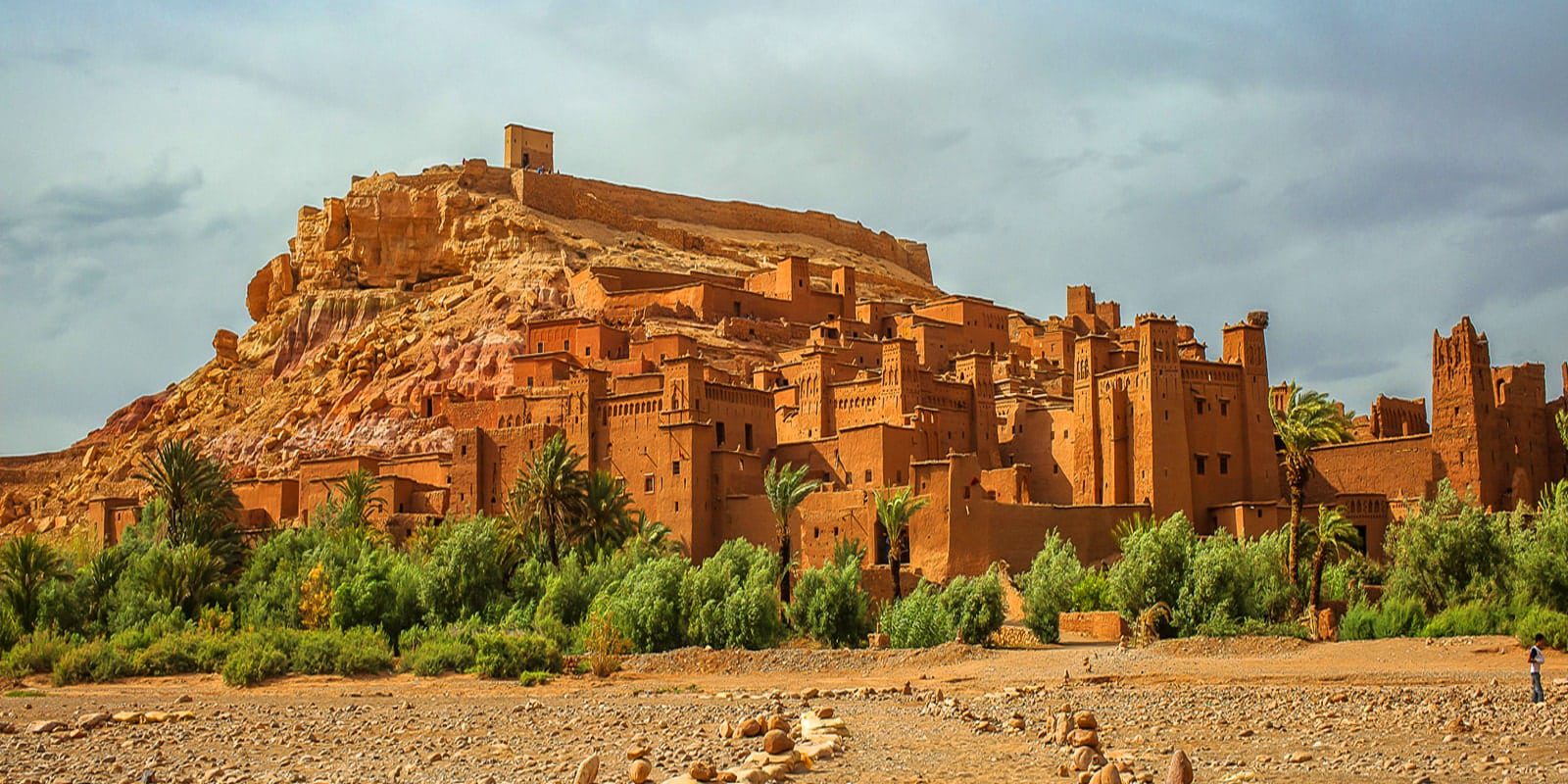 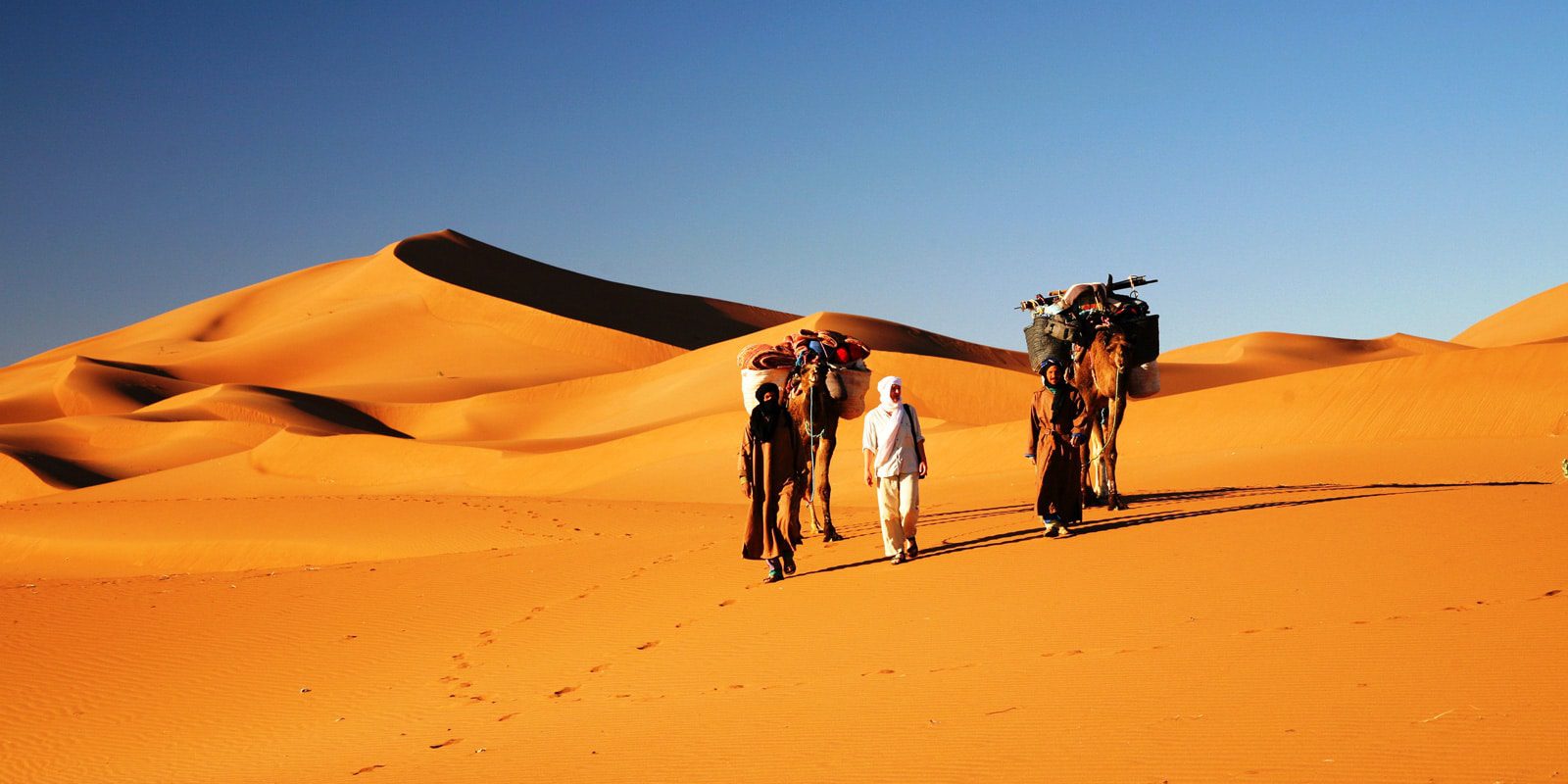 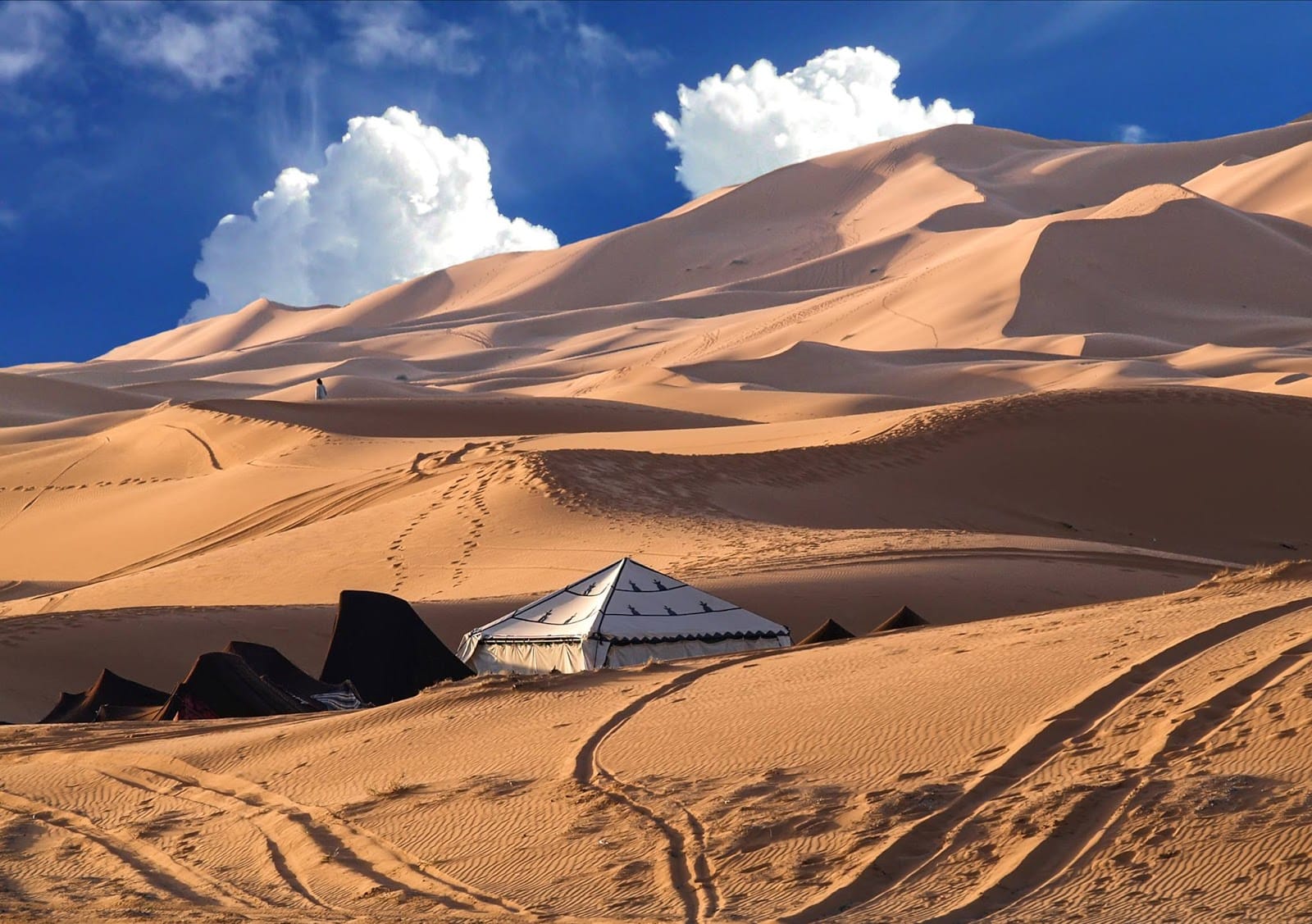 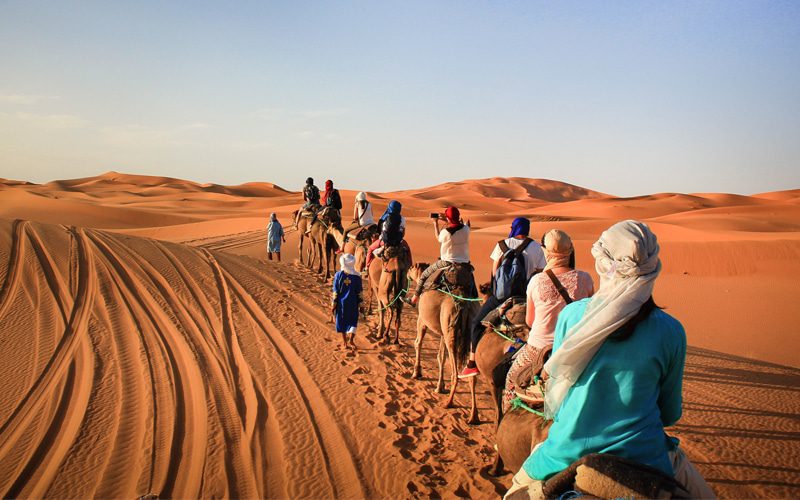